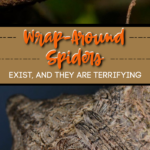 I have to tell you about these horrifying flat spiders that come straight from the Land Down Under, and they can STAY there, please.

You have probably never heard of them, and you will WISH you didn’t know they existed.

But, we’ll get to that in a minute.

I have always wanted to go to Australia.

All that is fine and dandy, but there is ONE thing that is keeping me away from this continent that I am so intrigued by, and that is their creepy crawly spiders!!

I’ve often heard about the huntsman spider, which are those terrifyingly huge spiders that are commonly found in cars and houses.

No thank you. I would just burn down my whole entire house if I found one of these hissing at me from the corner of my ceiling.

BUT, this flat spider might be even worse than the huntsman.

This spider, known as the wrap-around spider, is active at night, but then flattens itself onto tree branches during the day.

Did you get that? It totally flattens its body out, and “hides” in plain sight on the branches of trees.

So, you might be minding your business, walking through the Australian bush on a bright and sunny afternoon, grab onto a tree branch, and feel it wiggle out from beneath your hand.

They may be the things that nightmares are made of, but they aren’t too awfully dangerous.

The wrap-around spiders are known as orb-weavers, because they create huge vertical webs to catch their prey.

But, you will only see their webs near dusk or at night, as the wrap-around spiders will destroy their webs each new day, recreating the web when the sun goes down.

While they DO have “venom glands that produce toxins,” which “paralyze and digest their prey,” their venom is not that powerful on humans.

Orb weavers rarely bite and only do so when threatened and unable to escape. If bitten by an orb weaver, the bite and injected venom is comparable to that of a bee sting, with no long-term implications unless the bite victim happens to be hyper-allergic to the venom.

I don’t care HOW powerful their venom is, I don’t want it anywhere near my body!