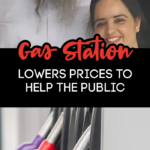 The people in Phoenix, Arizona are experiencing gas prices that average around $5.68 a gallon, and I can’t even.

There is one gas station, however, in the Phoenix area, that is helping out in the only way they know how.

They are selling gas at about 50¢ cheaper than anywhere else in town.

I mean, is it okay to hug your gas station employee?

Why Would A Gas Station Charge So Much Less Than The Average Price Of Gas?

Jaswiendre Singh, who owns a Valero Food Mart in Phoenix, practices the Sikh religion. Based on Sikh values, he believes that all people are equal, and people should love and serve others.

He understands that people are being strongly impacted by high gas prices, and to help out, he keeps his prices as low as he can.

Does he lose money on selling gas so cheap? Why, yes. Yes he does.

But, he hopes that he can make up for this loss at the pump by selling more inside his convenience store.

Because so many customers help him out by doing business at the store, he felt it was important to give back to them during what he called a “crisis.”

I have to make the money somewhere, someday, right, but not right now, — Now it’s time to help people.

This is one awesome dude.

So, if you live in Phoenix, live around Phoenix, are road tripping this summer through Phoenix, make sure and give Valero Food Mart a visit.

You can get some less expensive gas, and stock up on chips and Mtn Dew.

Let’s help this guy out, and show him some business.

We can help him for helping all of us!!