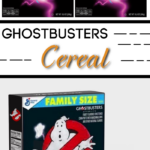 When there’s something strange, on your cereal aisle —

My kids are about to FREAK OUT, because there is a Ghostbusters cereal coming to a grocery store near you!

I remember, back in the day, we had the ORIGINAL version of the Ghostbusters cereal — I won’t say WHEN, because it would really age me — and this NEW version is a total throwback to that cereal.

Just like the OG version, this new version of the cereal appears to have crunchy reddish orange cereal pieces, and Slimer-shaped green and white marshmallow pieces. Fun, huh?

A release date hasn’t been announced, but it is already showing up on the Walmart website, so it can’t be long!

Technically, we don’t even know if this is the FINAL version of the cereal, but I’m guessing it’s a pretty good bet that we will see these boxes hitting shelves soon.

The release of this Ghostbusters cereal looks like it’s going to coincide with the June 2021 release of Ghostbusters: Afterlife, and oh my gosh — I am totally giddy about this movie. It looks hella good!!

And, you know, as soon as they release the movie, people are going to be buying the cereal up right and left. I know my kids are going to BEG me to get it — and of course, I’ll give in. *Smile*

Just like the OG version of the Ghostbusters cereal, I hope to goodness that the box is glow-in-the-dark. I totally want my kids to experience the fun.

Get ready, because this summer is set to be a good time, with both Ghostbusters: Afterlife and the Ghostbusters cereal dropping soon!

14 shares
This Lady Created A Bernie Sanders Wooden Peg Doll And It Is Everything!
← Previous
You Can Get Your Valentine An 'I Love You' Card Filled With A Shot Of Booze And I Want One
Next →
Click here to cancel reply.