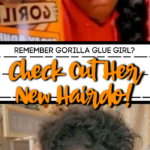 So the beginning of 2021, a lot of us were quite distracted from the world by watching the ‘Gorilla Glue Girl‘ chronicles.

Tessica Brown had quite an issue when she chose to use Gorilla Glue spray on her hair when she ran out of her regular hair product.

It was a huge mistake that turned into a big ordeal.

Not only was she embarrassed, but she was also in a lot of physical pain because her hair was basically cemented to her scalp.

Lucky for her a plastic surgeon named Dr. Obeng helped her to get out of her sticky situation.

She was donated a bunch of money on GoFundMe as well by people that wanted to help her out, and she donated some of that money to others as well.

In February she told The Root the following:

The thing is, it was affecting me before I even put it on social media,” she admitted. “I was in the house not eating, not sleeping. I was just on the internet trying to figure out what I could do to get this off my head. It took me a week before I even told my mom and my sister. I lost like, between 10 and 15 pounds. It was a bad situation. And then once I posted it, it just became worse. I was already down and then I posted it and folks were like ‘let me kick her a little further down.

Apparently she has a new hairdo and posted a video on Instagram showing off her new locks!

I do dumb stuff all of the time, but when I do stuff that isn’t the best choice… I keep it to myself and don’t post it to the internet because a lot of people online just are not that nice.