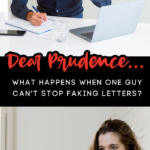 I love reading Dear Prudence letters. You know what those are, right?

It’s when someone takes to a columnist to ask for advice on a tough subject that they need — well — advice on. Hence the name “advice columnist.”

While Slate, the online magazine, is home to Prudence, there have been others before Dear Prudence. You have probably heard of Dear Abby or Ann Landers. They are known as “agony aunts,” and they are purely there to hand out their wisdom and advice.

It’s fun to think that there are really people out there with these quirky problems who need help and guidance.

But, as it so happens, the advice needed is not always — shall we say — on the up and up.

There is one fiction writer, in particular, who admits to spinning yarns, stretching the truth, or straight up making up a fantasy world where he could be or do whatever he wanted.

He would then take to Dear Prudence to ask for some of the most outlandish and bizzare advice.

But, here’s the best part, his not-so-true scenarios actually got published!!

Here is his story

Bennett Madison is a fiction writer. In particular, he dabbles in the genre of YA novels (that’s Young Adult, for all you non-book readers out there).

In 2018, long before we’d even heard about anything like the coronavirus, Bennett was in a writing slump.

Nothing felt “right” to him. He had the urge (as all “creative” do) to make something, but he was just discontented with everything he tried to start.

He didn’t want to just sit and do nothing, so he got a spark of an idea and he thought maybe he’d try it on a whim.

Writing fake letters to advice columns could not be considered a good career move; after all, it was unpaid and I wouldn’t even get a byline out of it. On the other hand, it was easy and creatively fulfilling.

He thought up fake scenarios that he needed “help” with, and he started to write. He submitted his advice letters to Dear Prudence under fictitious email accounts that he had set up just for the purposes of submitting the letters.

Over the course of a couple years, Bennett submitted more than 25 letters of fake origin to the online publication — but more amazing than that, 12 of the fake letters were PUBLISHED in the Dear Prudence column!

After trying and failing a couple times in the beginning, he learned what made a publishable letter, it must have “two opposing values: it must be plausible, but it must also be ridiculous.”

Sometimes Prudence would miss the mark on answering his letters in an acceptable (to him) way. But, other times, Prudence would give him the praise and accolades that he sought and so desperately desired.

He was fully aware that this wasn’t real writing, but it fulfilled the need for him to be creative and to get the express approval that would boost his spirits just a bit.

It was all harmless fun and games — until S*** got real. LOL!

He was sitting at a Mexican restaurant, downing margaritas, when he got a text from a friend that the article he had just submitted was starting to trend on Twitter.

Huzzah! This was pretty cool, indeed.

Then, just a bit later, he got a text from another friend. Tucker Carlson, of Fox News fame, had picked up his article and ran with it.

See, the name of the article was Help! My Husband Won’t Remove His Mask, Even For Sex!, and it was just plausible enough to maybe be fact.

Tucker Carlson saw the article as a hot opportunity, and ran it in a segment that Fox News labeled as “Terrified Liberals Keep Their Masks On During Sex.”

The attention was obviously thrilling, but it also made me uneasy. I had meant the letter as a mild comedy of manners set in the neurotic milieu of the Brooklyn middle class — a milieu that was, of course, my own. While part of me was excited to have duped a dweeb like Tucker Carlson with such an obviously phony scenario, I was disturbed to have provided chum for the pro-Covid, bleach-drinking lunatics in his audience.

The situation made him reconsider his plight. “What I thought of as harmless trolling might actually have evil consequences.”

He stopped writing Dear Prudence letters that day, but he will always have a funny story to tell.