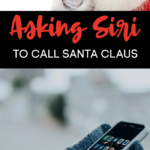 Considering how busy Santa is all year round, it’s not surprising that it can be hard to get ahold of Ol’ Saint Nick.

Considering Santa’s hotline often goes to voicemail (and who can blame the guy), individuals on TikTok are asking Siri to get ahold of Mr. Claus instead.

While asking Siri the first time to call the big jolly guy, Siri will tell you to say “ho ho ho” aloud while waving your arms in a snowflake pattern as if you were trying to get someone ’s attention in a large crowd five times.

Asking Siri a second time, led to Apple’s assistant telling more of the truth while bluntly repeating “I can’t, but I’ll put in a good word.”

If you desperately want to reach Santa Claus and ask Siri for a third try, Siri will say in its programmed voice “Calling 555 wait, I’m getting some electromagnetic interference from the North Pole.”

Since it appears that Mrs. Claus’ husband is a tough guy to reach, maybe if we schedule an appointment through one of the elves first, we may have a better chance of speaking with him but just incase, writing a letter to Santa is just as efficient!

I think we as parents should let our children know that there is no Santa and the truth is Christmas is the Birth of Jesus. We are celebrating Jesus Christ Birthday. When I found out that there was no Santa I was very hurt as a kid. I prefer to be told the truth.