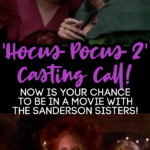 Hocus Pocus 2 is officially in production and you can find all of the information on the release here.

They are going to start filming next month in a park in Rhode Island and they are looking for people to join the cast!

The casting company for ‘Hocus Pocus 2’ sent out a casting call for people to play various extra roles in the new movie.

They will be filming in the Providence, Rhode Island area from October all the way through December.

Children and adults of ALL ethnicities, ages, genders, and sizes are encouraged to apply. Specifically seeking people with dance experience, men with shoulder length hair or longer, and young adults ages 18-22 years old.

The entire sequel movie is going to be filmed in Rhode Island, while the original movie was filmed in Salam, Massachusetts, and Hollywood.

I am so excited for this to be finished and released, it has been way too long for fans, right?

If you’re local to the area and want to be an extra in the film you can learn more from Kendall Cooper Casting – New England.