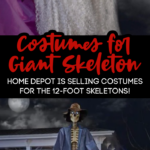 Remember the 12-Foot Skeleton from Home Depot that we wrote about last year and it went completely viral?

It sold out so quickly and then people started putting them out for other holidays too!

Well, the Skeleton is back at Home Depot and they also introduced the Inferno Pumpkin Skeleton that is a 12-foot tall giant!

If you have either of these big bad boys, you are in for a treat!

Home Depot has actually released a line of costumes that fit the 12-foot giant skeletons!

They’ve come out with three costume choices to dress them up this year and I need them all, and I also need more skeletons too!

There is a witch costume kit that comes with a witchy purple cape and of course a pointy witch’s black hat that has gray hair attached to it.

They’ve also released a scarecrow costume kit that consists of a blue jacket and brown hat, both are frayed, worn, and old and ragged looking to keep up with the creep factor!

The best one is the Santa costume kit so you can forget about packing him up until after the new year starts!

The Santa costume comes with a suit, that has a black belt, and to top it all off there is a white beard and a Santa hat!

If you want any of these costumes for your giant skeleton friends, I suggest you hurry before they all sell out!

Each giant skeleton costume kit is available at Home Depot and they offer free shipping!