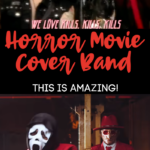 Imagine a cover band made up of your favorite slasher movie horror characters, well actually you don’t have to imagine because it exists!

The newest cover they have recorded is Mötley Crüe’s ‘Girls, Girls, Girls’, but they’ve changed it up to be Möstly Crüel ‘Kills, Kills, Kills’!

When it comes to cover bands, this is absolutely brilliant and I’m going to be playing these songs on repeat for the rest of October.

I’m especially loving the LL Cool J cover they did that they renamed as ‘Momma Said Chop You Now’, BRILLIANT!

The cover band also did a cover of Danzig’s ‘Mother’, one of my all-time favorites!

They’ve done so many, including the Feastie Boys ‘What’s Fa Lunch?’, and Ghostface singing ‘Call Me, Sidney’.

I’ve included some of their best covers below for your viewing pleasure, I hope you enjoy them as much as I did!