I recently spent nearly a week where my main focus each day was voiding my bowels. It sounds gross, but if you’ve ever been constipated you know what an all consuming thing it can be. It’s like a literal thorn in your side. Or, well, a cork in your you-know-where. Even laying in bed can be super uncomfortable. My only solace was relaying my plight via text message to all of my friends. Since there responses were more giggles than sympathy, I decided to share it with you, too. This is what happened when I didn’t poop for a week. 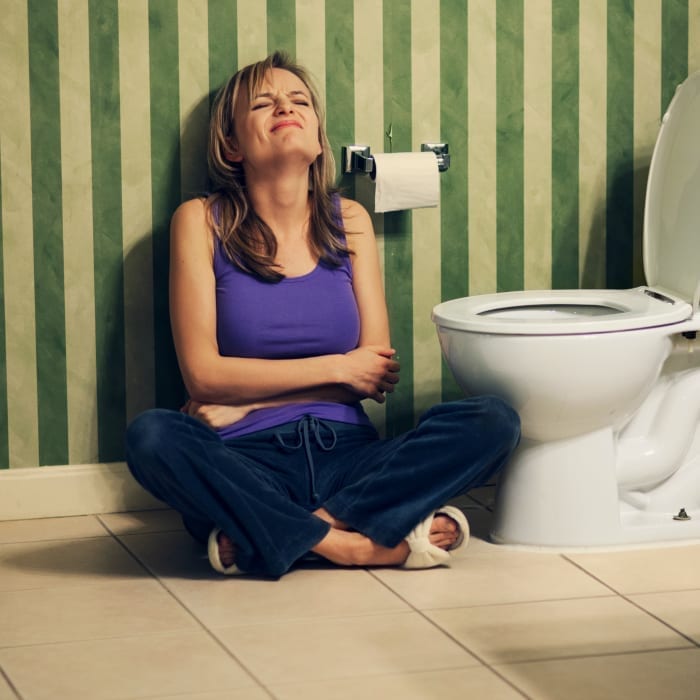 Day one. I woke up feeling bloated and crabby and my pants were a little tight. Instead of sitting down like a normal person I needed to lower myself onto the couch without bending at the waist ala a nine months pregnant woman, lest my button pop off and impale something or someone in the room. I kind of felt like I had to check the captains log (aka, hit the john), but when I tried – crickets. There wasn’t even a little bit of prairie dogging. I thought the cramps might be period pains; but it wasn’t time for my period and I wasn’t craving chocolate or suppressing the desire to murder everyone around me, so what was it?

Also, I should explain…see, I don’t poop daily. I know some of you are serial poopers. Like, if there were an academy you’d totally be pooper troopers, but I’m not one of you. I’m a twice a week kinda gal. So if I don’t go, it’s not such a big whoop. Not normally, at least. This time was different…

Day two. Bloat City, USA: Population: Me. I felt like I was rapidly growing in size, like Violet Beauregard in Willy Wonka. Maybe I should cut back on the salty foods, I thought. Instead, I opted for a Crunch Wrap Supreme and a loose fitting T-shirt, and yoga pants. Since it’s June in Florida and it’s 102 degrees outside, I said a prayer that my yoga pants would hold up to the crack sweat and tied a flannel around my waist just in case.

Day three. I could’t shake the feeling of having to go, but never got to the part where I actually felt like the time has come to ‘see a man about a horse’. Then it finally dawned on me: it’s been four days since I last went. This is not totally abnormal for me – but, at this point, my body was obviously saying “PLEASE HELP ME VOID THIS WASTE! DEAR GOD, I NEED FIBER!” So I chastised myself for not being more in tune and, at the same time, rolled my eyes at my body for being so dramatic. I drank a full cup of coffee instead of half. For the rest of the day my diet consists of about a million gallons of water, fiber enriched everything (thank you, Fiber One), and apple juice…

…and yet, no pooping. I wracked my brain trying to figure out where I put my maternity pants when it hit me: What if…..?

The only other time I had poo probs was when I was in the early stages of pregnancy. Like any other sane woman would – I took two tests just to be sure. Instead of being relieved that my womb was vacant, I was pissed that I spent eighteen dollars to find out that I was just very, very constipated.

Day four. I hated my horrible, awful, no good, very constipated life. Waiting to poop was worse than waiting for Sansa Stark to grow a pair. I decided to take matters into my own hands (not in the gross way) and did the one thing I knew would work: Target. I don’t know why it happens, but nearly every time I’m gettin’ my Target on I end up having to ‘back the bus out of the garage’, you know what I’m saying? So I spent the first 45 minutes loitering near the front of the store certain that I was going to have to make a beeline any second, but it was all for naught. I finally gave up and instead bought a book to take into the bathroom with me when I went home. Now I was on a mission and I wasn’t leaving the bathroom until I lost a few pounds.

Since I don’t have a squatty potty, I brought a stepstool into the bathroom with me to get the job done. I figured it would help me get into fighting position. I mean, squatting works, right? So, I called upon every child bearing technique I could think of. Enya music, check. Light incense, check. Burning candles, check. Boyfriend pacing in the other room, check. An hour and a numb butt later, I exited the bathroom; defeated and ready to kick kittens. I felt like Jon Snow in every episode of Game of Thrones, you know, when his face just looks totally chastised (You Know Nothing Jon Snow!) except I’m not nearly as good looking as he is. Plus, I bet he poops like a champ.

Sheer frustration hit at 2:00 AM. I decided that the only choices I had left were to either take some of the stool softeners I had left over from my C-section, or make a late night run to Taco Bell. Since the meds were right there (and the afore mentioned Crunch Wrap did nada), I took one, crossed my fingers, and went to bed.

The next morning, day five – nothing. I’d been so sure I would wake up and take a lovely cleansing poo, but no go. I took another stool softener (btw, why do those suckers taste so bad?). Finally, hours later, just as I’d resigned myself to a doctor’s appointment and inevitable enema, it happened: Code Brown. Sweet, smelly relief. Then it happened again. And again. I pooped ALL THE POOP. Lemme just say, it was the best feeling and most horrifying experience ever…and I once had to remove a used Diva cup from my tub.

That night, lying in bed traumatized, I promised myself that I would pay better attention to my diet. We’re talking all the fiber, all the time. I’d be a walking fart as long as I never had to go through this again. I snuggled up to my boyfriend and began drifting to sleep….when my stomach cramped.

As I stomped off to the bathroom, I kicked myself for not buying two books at Target. Apparently when winter finally comes, it brings friends. 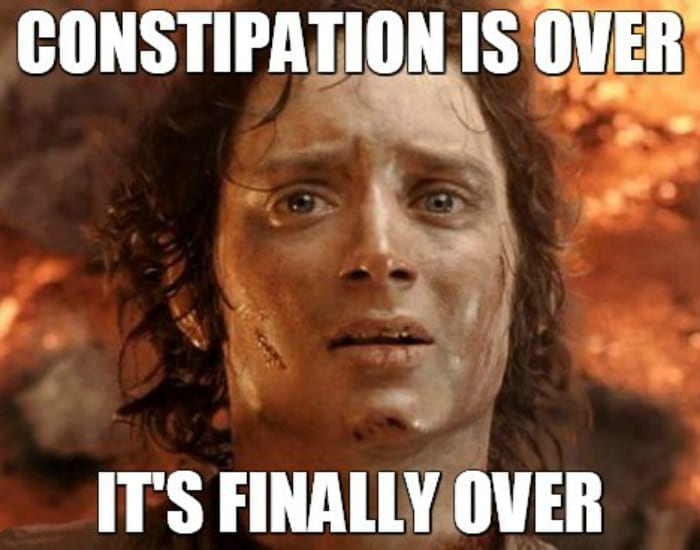 Sobits day seven still havent pooped. Starting to freak out been on toilet for 3 hours still nothing stomach not really hard have been hungry like a cow all week lots goes in nothing out. Ive tried EVERYTHING. Help any ideas

I poop three times a day, so I can't even imagine what it's like to go several days without a bowel movement. Seems like you'd end up in the hospital at some point. I can't sleep if I don't take a crap. I'll lay in bed for hours and hours, exhausted, but I won't be able to fall asleep until I poop. Here's a couple things you can try:

1. Kefir, prunes and blackberries/raspberries. Get some kefir grains and make real kefir. That stuff at the grocery store is NOT the same thing. It's an inferior product. Eat 3 to 4 prunes or blackberries with a 1/2 cup or more of kefir. You can also just make a smoothy with the blackberries. Sweeten with your favorite no-calorie sweetener. I prefer a teaspoon of xylitol (inhibits tooth decay!) and one scoop (42 mg) of Sweetleaf stevia. That provides extra sweetness, which is often needed because kefir can be very tart if you let it ferment too long.

2. Garden Of Life makes vegan protein shakes. I like the Smooth Coffee flavor. I mix it with raw milk and it's delicious. Have it for breakfast. It's high in fiber and you'll be pooping like you're 18 years old again. GOL's Raw Meal is also great for helping you to get back on your porcelain throne.

If you are desperate or in pain, you can try enemas or colonic irrigation. Try squatting in the backyard (where no one can see you) and hold the water hose up to your butt. Let the water go up your butt until you feel full, then let it out. Do this 20 to 30 times, if need be. That'll get things flowing. lol. I did this once a few years ago. It was the only way I could get to sleep. I had eaten a protein shake, which was whey protein mixed with pasteurized milk. I can't believe how badly constipated it made me. I have noticed that raw milk helps, though it isn't a complete solution, on its own. Those vegan protein shakes (the ones with fiber supplements added) really help a lot.

What does Fat Albert say when he's sitting on the toilet?

Happy pooping and I hope this helps.

Oh, by the way, that protein shake that constipated me....I had consumed it 24 hours earlier, before bedtime. I forgot to mention that. It takes roughly 24 hours for food to be pooped out after you eat it.

4 words for you. "Sugar Free Gummy Bears" eat a small bag of those suckers and you will poo out things that your going to eat in the future and unlike laxatives it only takes about 30 minutes for its effects to take hold.

Gummy bears help..........they probably have sorbitol in them. Sorbitol is known to do that.

Hey I'm experiencing the same thing rn. At first I didn't have the urge to poop so I didn't really bother, and these past 4 days I did but they just won't come out. It's been exactly a week today and my stomach feels full I can't even eat anymore. It's so uncomfortable especially when I try to sleep because there's like a baby bear groaning in my belly.. Went to doctor yesterday and he gave me meds but doesn't work. Sorry if it sounds gross and you probably don't remember anymore but was your poo hard? And did you take any kind of meds? Please email me because I feel like dying.. thank you