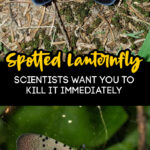 It’s not normal for a city’s Department of Agriculture to issue a kill-on-sight request, but in the case of the spotted lanternfly — squash the crap out of that thing.

Nah, bruh. That pretty exterior is concealing an evil little bug that needs to die.

This dirty little guy hitched a ride to the United States back in 2014, escaping its native home in Asia to hunker down near the City of Brother Love — Philadelphia.

The problem is, it didn’t stay put where it landed.

In 8 short years, the spotted lanternfly has made its way across state lines. Now, according to the New York State Integrated Pest Management program at Cornell University, this moth-like bug has an official problematic infestation presence in 13 states.

Why Is The Spotted Lanternfly Such A Problem?

Don’t be fooled by the pretty outward appearance of the spotted lanternfly.

Not only do these spotted lanternflies lay down a sticky substance (called honeydew) all over outdoor furniture, they stick together in packs. This means they get all over the people that are unlucky enough to get caught in a swarm.

But, the most problematic part of these spotted lanternflies is that they are a danger to the food growing in the fields and the grapes growing on vines.

The spotted lanternfly sucks the sap out of the vines –And it makes them less hardy for the winter, so vines can be lost over the growing season.

Brian Eshenaur, an expert with the Cornell pest program

So basically, if you see one, SQUASH IT!!

These dudes like to hitch a ride with unwitting drivers, so be especially vigilant to check your cars.

Check your vehicle — What you’re really after is anything that maybe is alive, that is kind of hunkered down in there and is not going to get blown off the vehicle during the trip. Really, really important.

It’s not often you are asked to kill something on sight, but in this case, squish it and dispose of it!