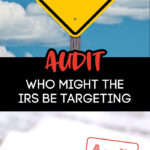 Just the words “IRS Audit” send people into a panic. NOBODY wants to get his with an audit by the IRS!

But, if the Democrats’ Spending Plan gets approved by the House of Representatives, more people than ever may be getting the dreaded notice that an audit is happening.

According to CNBC, part of this spending plan includes nearly $80 billion in IRS funding — more than $45 billion of which would go towards “enforcement.”

What does that mean?

Well, more “normal” Americans might be feeling the audit pressure from the IRS.

Our biggest worry in this is that the burden for these audits will land on Walmart shoppers.

Of course, there are some times when lower-income families get targeted as well.

Since many lower-income Americans are wage earners, these audits are generally less complex and many may be automated.

How Does The IRS Decide Who To Audit?

The higher the score, the more likely a person would be to get an audit.

They are looking for things like income to charitable donation ratio, unreported income, rounded numbers, and types of deductions.

How Might The IRS Change Who They Target For Audits?

The W-2 employee is much less likely to get audited than a self-employed person by far, in my opinion.

We will most likely see an increase in audit chances for the self-employed taxpayers. Although, the odds may stay exactly the same. We’ll just have to wait and see.

Here’s the thing, though. Don’t freak out and panic yet.

This little piece of legislation, although it’s already passed the Senate, it still has to pass the House of Representatives.

THEN, if it is voted in, the IRS still has to hire and train the people in doing audits.

Of course, one of the best [ways] to avoid future headaches is by keeping accurate records with detailed bookkeeping and saving all receipts.