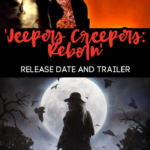 I have loved all of the ‘Jeepers Creepers’ movies so far, the first one of course being my favorite.

Well, now we have yet another ‘Jeepers Creepers’ film on the way and I look forward to watching it and seeing how it holds up to the others.

The movie is called ‘Jeepers Creepers: Reborn’ and I’ll include the trailer at the end of this post.

One thing that has me a bit concerned is that this is an indie reboot which means new writers, director, and cast.

It’s supposed to be the first movie in a new trilogy about the demon creature that returns every 23 years to feed.

Chase and Laine head to the Horror Hound festival where Laine begins to experience unexplained premonitions and disturbing visions associated with the town’s past, and in particular, local legend The Creeper. As the festival gets underway and the blood-soaked entertainment builds to a frenzy, Laine believes that something unearthly has been summoned and that for the first time in 23 years…The Creeper is back.

‘Jeepers Creepers: Reborn’ will release on September 19th, 2022, and will be in theaters for a limited time only.

Fathom Event’s release of ‘Jeepers Creepers: Reborn’ is scheduled in theaters from just September 19th until the 21st and you can purchase your tickets here.