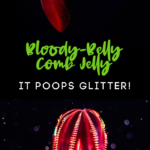 There is an aquarium in Monterey Bay that has the coolest creature on exhibit, and they caught it pooping on camera. Pooping glitter!!

This is one of those cool things in nature that you hardly ever get to see — like a panda in its natural habitat, stumbling upon a mushroom that looks like a sparkly disco ball, or finding a unicorn in the wild.

Well, maybe not that last one. That’s just my inner child doing its wishful thinking.

There is a sea creature known as a Bloody-Belly Comb Jelly, and it’s not as horrific as it sounds.

It’s hella cool with its bright red color, it’s glowing ridges, and the continuous dance it does through the water.

This Bloody-Belly Comb Jelly lives in the deep, deep ocean. So far down in the depths that sunshine wouldn’t even think about kissing its outer edges.

Ironically, at the depths where the bloody-belly lives, it’s nearly invisible to predators. In the darkness of the deep sea, animals that are red appear black and blend into the dark background.

Now, this gorgeous creature was only first discovered about 20 years ago. Only a handful of people have historically been able to lay their eyes on the Bloody-Belly Comb Jelly.

That is until now. The Monterey Bay Aquarium has found a way to keep this super rare species of marine animal alive and on exhibit.

The Bloody-Belly Comb Jelly is an amazing creature by itself. But, the aquarium just caught something on camera that nobody has ever before seen.

And, it didn’t just poop. It pooped sparkly unicorn glitter!!

There may not be actual unicorns in the wild, but we come pretty close to an aquatic unicorn, here!

I don’t know about you, but I want to immediately pack my bags and make the trip to the Monterey Bay Aquarium to see the glitter poop first hand!!

You can see the video of the glitter pooping Bloody-Belly Comb Jelly on the Monterey Bay Aquarium YouTube channel.

It’s kinda hard to see the sparkly poop when you first watch it. Look in the black abyss above the middle rear of the animal.

Once you see it, you can’t look away. Glitter Poop, Y’all!!