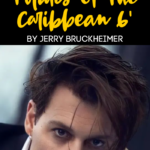 Ahhh! I am so excited!

I have loved every single one of the ‘Pirates of the Caribbean’, but I am curious how part 6 will work out.

I mean with everything that has happened with Johnny Depp due to the Amber Heard craziness… will we get Johnny Depp in part 6?

I’m sure everyone would love to see Johnny back as Captain Jack Sparrow, but that has not been confirmed at this time… although the rumor mill says “yes”.

Producer Jerry Bruckheimer has confirmed that ‘Pirates of the Caribbean 6’ is definitely happening and even one of the original writers, Ted Elliot, is returning.

I’m very excited, it’s going to be terrific. We’re just putting this together right now. We’re still working on the screenplay, but it’s very unique and has one of the original writers who wrote the first one, Ted Elliott; he’s writing it. He’s got a great command of the language, and he writes great characters and tells terrific stories.

I have a feeling that even if the plan is to bring Johnny Depp back as Captain Jack Sparrow, they will make us wait and tease us with the possibility.

I do know that Johnny has said that he didn’t want to return after the way Disney had treated him, and honestly I can not say that I blame him for standing his ground.

I guess we will just have to wait and see!