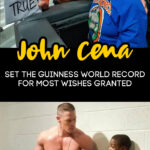 I’m not much into the world of professional wrestling. I only know John Cena from commercials, pop-culture references, and a handful of movies.

But, he just set a new world record, and it’s for the BEST thing ever.

John Cena just set the Guinness World Record for the most Make-a-Wish wishes granted, and I’m not crying. You are!

According to People, John Cena is the absolute most requested celebrity in the Make-a-Wish foundation, and he has granted 650 wishes for critically ill kids!!

That number is HUGE!! This guy takes time out of his star-studded life to sit down with Make-a-Wish kids, and I have a whole new respect for the man.

Mr. Cena first collaborated with the organization in 2002 — so that’s — hmmm, math — that’s about 32 wishes that he grants per year!!

Get this. There is no other person — celebrity or otherwise — who has granted more than 200 wishes.

John blows everyone else out of the water!!

I just drop everything — If I can offer a fantastic experience, I’ll be first in line to do my part.

Make-A-Wish’s list is enormous and they literally will do anything you want. ‘I want to kick it with John Cena and see him wrestle.’ That is the coolest thing I have ever heard in my life.

Thank you, Mr. John Cena, for being an outstanding human being!