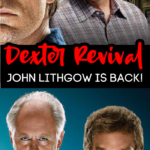 Yes, I know… “Trinity” is dead, but so was Harry and he was a major character on ‘Dexter’.

If you’re a fan of ‘Dexter’ then you know what a major part Arthur Mitchell, aka the “Trinity Killer” was to the show.

If you haven’t watched it, then you may want to stop reading now…

As Arthur Mitchell he was definitely evil and dark and completely freaking psycho!

If you remember, he was the one that killed Rita and left Harrison sitting in a pool of his mother’s blood.

Well, according to Deadline, the word is that John Lithgow will reprise that role of the “Trinity Killer” for the newest season of ‘Dexter’!

Since Arthur is dead, we know that he must be making an appearance as one of Dexters mental friends as many others have in the past.

His brother Brian (The “Ice Truck Killer” was a visitor for a bit after he died as well.

The details are limited, but it seems to be happening and John Lithgow is supposed to join the cast and crew for one day of production out in LA.

The only thing left to make this better for me is to bring back Hannah and reunite Dexter with her and Harrison!