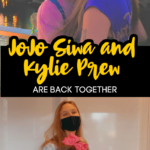 After being my best friend for over a year, January 8th 2021 I got to start calling this exceptional human my Girlfriend. And since then I’ve been the happiest I have ever been!

Then, like a lot of young couples… they broke up after almost a year of being together as a couple.

JoJo announced the break-up on Paris Hilton’s ‘This Is Paris’ podcast in November 2021.

I have yet to talk about this officially, publicly, but we broke up.

JoJo Said on ‘This Is Paris’ Podcast

It happens, I’m just the type of person that never got back with people after we ended things, I always moved on with life and never looked back.

JoJo continued her interview and made sure that everyone knew they were still best friends!

But she is literally still my best friend. I talked to her yesterday, she just got a new puppy. She’s awesome. She’s having the time of her life, I’m having the time of my life,” she continued. “I’m really lucky that I didn’t lose her completely because, you know, even though relationships end, friendships don’t have to end.

JoJo Said on ‘This Is Paris’ Podcast

However, they decided to give it another go and JoJo Siwa has confirmed with an Instagram post on Thursday that she is officially back together with Kylie Prew.

If you love something let it go, if it comes back….🤍♾.

The image shows JoJo Siwa kissing Kylie Prew on the cheek at Disney World in Florida.