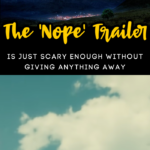 This summer is already looking like it’s going to heat up in the movie department, and I can’t wait!!

We are just starting to get our first look at summer movies, and MAN!! This first one looks wicked good!

The film, which was written, directed, AND produced by Jordan Peele — who you know from about a million different things, including Mad TV.

He is known for his work in comedy and horror, but he’s also a voice actor who’s been in films like Toy Story 4, Storks, and Captain Underpants.

But today, TODAY we are focusing on his new film — NOPE.

Just from the 2 minutes trailer, I HAVE to see this one!!

It’s being dubbed as a neo-Western science-fiction horror film, and it stars the likes of Keke Palmer, Steven Yeun, Daniel Kaluuya, Michael Wincott, and so many more!!

What is Nope about?

Okay, here is what we know from the trailer: Almost nothing.

But, you are going to be so intrigued, you are still going to want your butt sitting in the theaters in July to watch it!!

When the trailer starts, it looks more like a commercial — in fact, I had to restart it, because I was giving it my “commercial attention” instead of my “movie trailer attention.”

We see Keke Palmer, who is telling us that she is the great, great, great (maybe one more great?) granddaughter of the one who was seen in The Horse In Motion — the first moving video ever.

This is supposed to be a selling point for the Hollywood horse ranch that she runs in the California dessert.

We then cut to Keke dancing inside a house, when the electricity slowly starts to die.

It’s dark. Storm clouds start to roll in. The animals get spooked. The hairs on MY neck stood up.

Then we see a pair of eerie lights go on in the distant landscape.

There is a ranch hand outside who turns to look at the lights, right as they go on.

You know SOMETHING is coming — you just aren’t sure WHAT.

Is it some weird creatures like in Tremors (am I the only one who’s seen it)?

I don’t THINK it’s ghosts or zombies — but I could definitely be wrong.

We get a lot of creepy shots — it’s the music that puts them over the top in the creeptastic department — of those parachute-material dancers that you see outside of car dealerships.

At one point, they all stop flapping, and fall to the ground in eerie silence.

We see a lot people looking to the sky — including a surveillance-type camera that tracks up to the heavens.

We see a dark cloud blanketing the landscape.

And the final scene we see is someone getting tossed in the air.

I’m telling you — the trailer has me saying, “Nope!” And, it looks like it’s going to be one hell of a ride!!

You can see the trailer for Nope below.