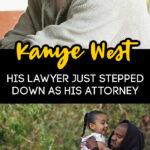 Kanye’s divorce lawyer just washed her hands of Ye and his crazy antics.

Samantha Spector — his now former attorney — formally filed papers with a court in Los Angeles to step down as Kanye’s family law attorney.

There has been an irreconcilable breakdown in the attorney-client relationship.

Is anyone really surprised by this? I mean, he does seem to be a tad bit unstable.

Attorney has communicated with Ms. Hong, an attorney-at-law, who has confirmed she is acting on behalf of Ye and should receive all communications directed to him.

On the same day that Samantha Spector filed to be released as Kanye’s lawyer, he was busy dropping a new song which touches on his custody battle with Kim K.

He has NO issues telling the world what’s going on in his life via his raps.

When I gotta return them, scan ’em like a barcode. Wait, no hard feelings, but these feelings hard though. Wait, who got the kids in those. What are those?

I could be wrong, but I think Ye has issues with his custody arrangement.

I only see three kids, who watchin’ Chicago?

Daddy in Nebraska. Let the kids dig a tunnel to my house like Chapo.

Earlier this year Kanye fired his lawyer, Chris Melcher. This was before the March hearing that declared Kim Kardashian legally single.