You Can Get New Kool-Aid Candy Dippers And I Feel Like A Kid Again! 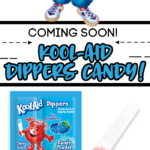 One of my favorite candy choices growing up was FunDip! The packets of the sweet fruit flavor powders with the candy stick you would dip in, remember those?

According to Drugstore News, Hilco has partnered with the brand’s parent company, Kraft Heinz, to launch Kool-Aid Dipping Candy. This isn’t the first Kool-Aid candy though!

Just lick that stick and dip it into the sweet fruity powder in either blue raspberry or cherry!

I know, it’s the healthiest thing ever, but it’s good and makes me think back to my childhood. We used to walk down to the corner store and load up on candy.

I hope they add other Kool-Aid flavors as well! I would love to see this in a Grape and Lemonade flavor! Or combine the two into the Purplesaurus Rex Kool-Aid flavor, which is my favorite!

You’ll be able to get the Kool-Aid Sipping Candy for about $1.49 to $1.99 per pack. It should be available soon wherever you buy candy, but there was not a release date listed.

88shares
Justin Timberlake Just Issued An Apology To Britney Spears And Janet Jackson And It's Beautiful
← Previous
If You’re Itching To Travel, These Videos Will Make You Feel Like You Are Seeing The World
Next →
Click here to cancel reply.