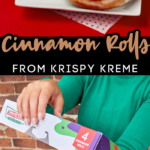 No longer does the popular doughnut eatery only create fresh doughnuts, rather hot cinnamon rolls are now on the menu.

Krispy Kreme is not only dabbling in the rolled up dessert but you can also order a few of them with a crunchy cereal topping.

That’s right, along with freshly made cinnamon rolls, you can also count on the new pastry to be topped with square pieces straight from the Cinnamon Toast Crunch cereal box!

While both are equally delicious, you can expect the Original Glazed Cinnamon Roll to be yeast-raised, hand-rolled with cinnamon, and glazed.

The limited-edition cinnamon roll sweet treats are available individually to satisfy a moment’s sweet teeth craving or included in a four-count decorative box to save for later, because that’s just how Krispy Kreme rolls.