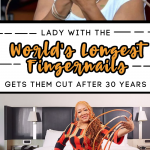 I like my fingernails as much as the next person, but can you imagine having 24-foot fingernails?

That is exactly what the woman with the longest nails in the world just had cut off.

Ayanna Williams, who lives in Houston, Texas, had been growing her nails for 30 years, but then decided it was time to let them go.

I can’t even fathom nails that long.

I mean, my nails crack off or bend back when they even get a few centimeters long!

(Her) manicure took three to four bottles of nail polish over the course of a few days.

Nope. I’m not that committed to anything.

She gained her Guinness World Record notoriety in 2017 as the holder of the longest fingernails in the world.

How did she wipe? — You KNOW you were thinking the same thing.

Ayanna traveled to Fort Worth, Texas — shout out to my Fort Worth peeps — where she had the nails professionally cut off by a dermatologist.

Those bad boys had to be removed with an electric rotary tool — fingernail clippers were NOT going to do the job.

Can you imagine the amount of keratin she must be able to produce?

I’m a little jealous! Her hair must be BANGIN’!

(If you weren’t aware, both hair and nails are made from keratin)

What did Ayanna have to say about removing the nails that had been a part of her for 30 years?

With or without my nails, I will still be the queen. My nails don’t make me, I make my nails!”

Ayanna’s crazy long nails are going to be on display at the Ripley’s Believe It or Not! in Orlando — so when you are there visiting Disney World, you can swing by Ripley’s and gaze at her 30-year dedication.

In case you were wondering, Ayanna says she isn’t going to grow back her record-breaking nails.

She plans to keep them at about 6 inches long — which is still too much for me to handle!

1 shares
People Say The Moderna Vaccine Has Worse Side Effects Than The Pfizer Vaccine
← Previous
Watch The Trailer For Netflix's 'The Sons of Sam' Docuseries, It's Your Next True-Crime Binge!
Next →
Click here to cancel reply.