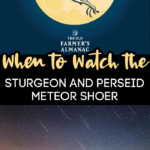 The Sturgeon Moon, named after the fish will be the fourth and final supermoon of this year in 2022 and guess what, it’s coming sooner than what you might be already thinking!

An exciting night for stargazers and lunar lovers because not only will this supermoon be showing its face very soon, but there’s a meteor shower to keep watch of too!

And speaking of celestial activity, Saturn will also be saying hello considering the planet with rings will look like a large shining star appearing next to the Sturgeon supermoon on the same day.

The Perseid Meteor Shower is expected to put on a show around the same time as the Sturgeon Moon and is considered to be “the best meteor shower of the year,” says NASA.

So when should you look up at the sky to watch the meteor shower and view the Sturgeon supermoon?

While the Sturgeon supermoon will show in the sky tomorrow, on August 11 around 9:36 p.m. ET, Perseid’s Meteor Shower will show off a few days later on August 13!