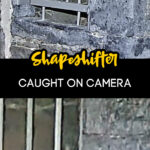 Someone caught a shapeshifting entity on camera, and I’m shook.

There is a story around Lackeen Castle, a 12th century structure in Ireland, and it involves an entity known to the locals as a púca.

What the heck is a púca, you ask?

A púca is part of Celtic fairy folklore, and is known as a shapeshifting ghost or spirit that can be helpful or a bit more menacing with a proclivity for mischief.

This particular “púca” resides at Lackeen Castle, where folks say it can still be seen roaming the halls.

The legend goes that some old hags were stealing from a dead body when an O’Kennedy came upon them. They were defended by the púca, which was captured by O’Kennedy and taken to Lackeen castle, where O’Kennedy’s servants begged their master to let it go or else they would be cursed.

Coast to Coast AM

According to folklore, the entity was released, but — as you can see in the picture — it still resides at the castle today.

Oh sure, you might say the picture is due to light and shadows, but that theory is just no fun at all.

You can’t tell me you don’t see a face in the picture!!

What do YOU think of the entity caught on camera at Lackeen Castle?