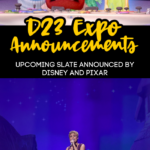 Yesterday at the D23 Expo 2022 there were some amazing announcements and I am so excited to tell you all about them!

D23 took place at the Anaheim Convention Center and fans gathered to be the first to hear big announcements from Disney Live Action, Pixar, and Walt Disney Animation Studios.

Tons of sneak peeks and trailers were released, and they even closed the event with a performance celebrating Disney Animation’s upcoming feature film ‘Wish’.

The showcase began with showing special moments in studio history and an amazing performance by Cynthia Erivo’s of the classic Disney song “When You Wish Upon a Star” from Disney’s live-action version of “Pinocchio,” now streaming on Disney+.

What a way to kick off the show. Of course, ‘When You Wish Upon a Star’ was first heard in the animated film ‘Pinocchio’ in 1940. It’s a motto about dreaming big, dreaming the impossible and making those dreams come true. And that’s something we try to do each and every day at the studio.

They also unveiled a brand-new logo of the iconic Disney castle, now platinum in honor of Disney’s 100 Years of Wonder celebration.

The new Disney castle introduction will play in front of all Disney theatrical and streaming releases starting this fall.

Here’s what we learned from the Disney Live Action portion of the event:

We love making movies for the big screen and we have some incredible ones coming up. But what’s so exciting about Disney+ is that it gives us a lot of freedom to tell an even bigger range of stories. We continue to explore reimaginings that honor our Disney legacy, and we can also create the next generation of Disney original stories. And of course, we have the chance to explore new chapters of stories we all know and love.

The Sanderson Sisters, of ‘Hocus Pocus’ fame magically appeared on a video screen to surprise everyone with a brand new ‘Hocus Pocus 2’ trailer!

The live-action reimagining of the 1953 animated classic will begin streaming on Disney+ in 2023 and I can’t wait!

Sean Bailey ended his presentation with four titles heading to theaters in 2023 and 2024:

Here’s what we learned from the PIXAR Animation Studios portion of the event:

These last few years have been a time of great change in the world. And it’s led us at Pixar to think about the future. Or, if I’m channeling my inner Joe from ‘Soul,’ I’d ask: ‘Why are we here? What’s our purpose?’ Well, for us, it’s to tell great animated stories. Whether those are theatrical feature films, streaming series or shorts, we think telling stories is foundational to who we are as people. They really define us. And we believe in the power of animation to capture and reflect the stories of our own lives.

Directors Carrie Hobson and Michael Yates provided a closer look at Pixar’s first-ever long-form series ‘Win or Lose’ and what inspired it.

The series follows the Pickles, a co-ed middle school softball team, in the week leading up to their championship game, ‘Win or Lose’ will stream on Disney+ in Fall 2023.

Pete Docter then welcomed director Adrian Molina and producer Mary Alice Drumm to the stage to showcase for the first time ever plans for the original feature film ‘Elio’.

‘Elio’ is a story about an 11-year-old dreamer Elio who is artistic, creative, and an avid INdoorsman who finds it hard to fit in.

Meanwhile, Mom Olga, who runs a top-secret military project, is working to decode a strange signal from outer space.

But it’s Elio who makes contact, gets beamed into space, and is subsequently mistaken for an intergalactic Ambassador for Earth, ‘Elio’ will release in Spring 2024.

Next up the voice of Joy, Amy Poehler was heard, she then arrived on stage to announce that ‘Inside Out 2’ is officially in the works at Pixar!