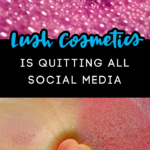 I love me some Lush Cosmetics! Those bath bombs are simply divine!!

And now, Lush is taking a stand. It’s a risky (for them) stand, but it’s something they truly believe in, so I have to give them props for that.

What does that mean? They are pretty much going social media silent. *Gasp*

Why? “Lush have finally had enough, in light of Facebook whistleblower.” They want social media to be a safer place for their users, and they are willing to go social media dark until that happens.

“All Lush brand, retail and people accounts, around the world will be closing.”

That means, they are losing a heck of a lot of free advertising — a risky move, for sure.

But, they don’t care. They are taking a stand — boycotting if you will — “until [social media] takes action to provide a safer environment for users.”

Lush operates in 48 countries, and as of November 26th, Lush will be leaving “Instagram, Facebook, TikTok and Snapchat.”

In the same way that evidence against climate change was ignored and belittled for decades, concerns about the serious effects of social media are going largely ignored now.  Lush is taking matters into its own hands and addressing the issues now, not waiting around until others believe in the problem before changing its own behaviour.

They are taking this stand “to shield [their] customers from the harm and manipulation they may experience whilst trying to connect with us on social media.”

They want everyone to feel safe and valued. People should be able to truly relax and turn off while enjoying Lush products, and they are taking a stand — a risky one — to make that happen.

They do plan “to invest in new ways to connect and build better communication channels elsewhere.”

*Slow Clap* Good for you, Lush. You will be missed, but THANK YOU for putting the safety of consumers ahead of the bottom dollar!!