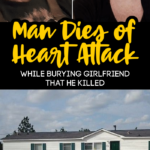 Do you believe in Karma?

If you were not a believer before, you may just change your mind after reading what happened to a man in South Carolina!

Sixty-year-old Joseph McKinnon was found dead, the thing is, his body was discovered near a pit that had just been dug!

In the pit, authorities discovered the body of his girlfriend, Patricia Dent, age 65.

Apparently, Joseph McKinnon allegedly strangled and killed Patricia Dent, then while burying her in the backyard karma took control.

Joseph had a heart attack and dropped dead in the middle of burying his murdered girlfriend!

This all took place in Trenton, South Carolina where police discovered the crazy scene after receiving a call about an unresponsive male lying in the yard.

Mr. McKinnon then bound her and wrapped her in trash bags before putting her in the previously dug pit.

When they responded to the call, they quickly noticed the body of the deceased girlfriend in the pit.

Talk about poetic justice because Joseph suffered a heart attack while he was trying to cover up the body of his girlfriend that had died by strangulation.

I think this is one of the craziest things I have ever read, but I am so glad that he wasn’t able to finish the coverup and the family will have the answers that they need.