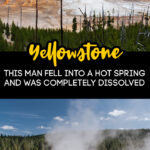 This just might be the best PSA for standing back from those pools, ponds, and geysers at Yellowstone.

There was a dude that decided to take a little dip in one of the hot pools, and he was completely dissolved before rescue crews could retrieve his body.

We’re talking, he was completely dissolved in less than a day!

Why did this happen?

It turns out, according to IFL Science, there is “one of the largest magma chambers in the world” right under Yellowstone.

Because of this magma chamber, the water that spews forth from the pools, ponds, and geysers tends to be INCREDIBLY hot and hella acidic.

There’s a closure in place to keep people from doing that for their own safety and also to protect the resources because they are very fragile.  But, most importantly for the safety of people because it’s a very unforgiving environment.

Like, these water sources are so hot and acidic that they definitely have the potential to kill you — and that might just put a whole damper on your trip.

How did this guy end up in basically a hot pool of acid at Yellowstone?

Reports say that he was trying to “hot pot.” That is what amounts to one of those TikTok challenges that only the smartest of the population try to mimic. (Did you catch the sarcasm there?)

Hot pot is when a person finds a superheated thermal spring and soaks in it. It is commonly done to relieve stress, like when you relax in a hot tub, but is also done for fun with other people to be adventurous.

So, apparently this guy’s sister was shooting a video of him trying to “hot pot” in a pool of water that’s part of the Norris Geyser basin.

He reached down to dip his finger into the hot water, slipped, and fell in.

Rescuers arrived at the scene and found his body, his flip flops, and his wallet. However, a lightning storm sprung up in the area, and they were unable to immediately recover his body.

When the rescuers came back the next day, they were unable to find any sign of the man. He had completely dissolved.

Let this be a warning. STAY AWAY from the water sources at Yellowstone. When the signs say “warning,” they mean it!