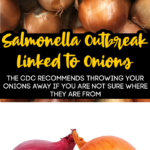 Right now there is a Salmonella outbreak that has been linked to onions!

If you do not know exactly where your onions came from, then the CDC says that you should throw them away, better safe than sorry!

It looks like I’ll be tossing out all of my onions that I got last week because I have no idea where they’re from and Texas has the highest number of cases so far.

The Salmonella outbreak strain is called Salmonella Oranienburg and 652 have been known to have been infected as of October 18th.

Those that have been identified as having the strain of Salmonella are spread throughout 37 states, so like I said… better safe than sorry!

They expect the number of cases to grow and apparently, the outbreak was first reported back in September, but they had no idea what food was behind the spread.

The last thing I need right now is to get sick from eating some onions, nobody has time for that.

This isn’t just one type of onion either, it’s yellow, white, and even red onions that have been imported from Chihuahua, Mexico.

These onions have been distributed in the United States by ProSourse Inc. in Hailey, Idaho.

ProSource Inc. indicated onions were last imported on August 27, but these imported onions can last up to three months in storage and may still be in homes and businesses. Investigators are working to determine if other onions and suppliers are linked to this outbreak.

Not only were they sent to grocery stores, but also restaurants… another reason to plant a garden and eat at home.

Throw away any whole red, white, or yellow onions you have at home that do not have a sticker or packaging. If you can’t tell where the onions are from, don’t buy or eat them.

ProSource Inc. is recalling all of the onions with import dates from July 1st through August 27th, according to the FDA.

If you have consumed onions and are experiencing the following symptoms, you may have Salmonella:

Symptoms can show up anywhere from 6 hours to 6 days after consuming food that carries the bacteria, ew.

The good news is that most people don’t need any treatment and it resolves within 4-7 days, but still call your doctor.

The CDC has reported that there have been 158 cases in Texas, so like I said I’m not taking any chances.

States with the most cases:

The following states have had 14 or fewer cases:

The CDC says these numbers are most likely MUCH higher because not everyone reports illnesses and some may not even know that is why they are sick.