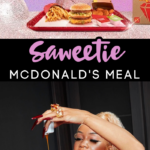 Another day, another McDonald’s celebrity meal.

McDonald’s is getting a glittery makeover!

The next celebrity to influence the tastebuds of the fast food eatery is none other than the female artist herself, Saweetie.

The first female singer to get her own inspired meal has already hit menus nationwide.

The meal includes a beefy Big Mac, four-piece McNuggets, medium fries, a medium sugary Sprite, Tangy BBQ Sauce and a renamed Sweet ‘N Sour sauce which according to the rapper, she completely mismatches like stuffing nuggets in a bun or topped on french fries drizzled with sauce.

The rapper’s real name Diamonté Harper, has several hit songs such as ‘Best Friend”, “My Type”, and “Icy Girl”.

McDonald’s says the celebrity meal will even be served in an “icy new packaging inspired by her own style.”

You can count on ordering the meal in restaurants, through the drive-thru, with McDelivery and on the McDonald’s app!

Alongside the glamorous meal, McDonald’s also announced the Saweetstakes’ contest!

Fans have the chance to win two limited edition handbags (one for them and the other for their best friend) from Brandon Blackwood, one of Saweetie’s favorite bag designers and a five day trip to Las Vegas for two to see her perform.

Mark you calendars on September 5th because that’s the last day you can order the meal with the McDonald’s app in order to be entered for a chance to win a grand prize of $9,175.

So go out and pick up your best friend and get the new Saweetie Meal out for a limited time only.