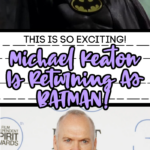 Yessss! This is super exciting to me! I have two favorite Batman’s, one is Michael Keaton and the other is Christian Bale.

In my opinion, there are no other options. I said what I said!

It is super officially official that Michael Keaton is returning to play the most awesome Batman ever! So, we’ve talked about this before, the fact that ‘The Flash’ would be telling the multiversal story of Flashpoint.

This means there would be two different Batman characters right? One would be Ben Affleck’s Bruce Wayne would be reteaming with Barry Allen, and Michael Keaton would also come back!

I mean it’s only been since 1992! It’s been way too long! ‘The Flash’ has officially started production in the UK, with Michael Keaton!

According to The Wrap, Michael Keaton and Ben Affleck will both play their own versions of Bruce Wayne. I could go without Ben’s, but whatevs…

In the film, they will both be interacting with Barry during his journey to fix the reality he broke.

I am seriously excited about this and I know it makes me sound a bit nerdy. I don’t get “fangirly” all that often though.

I am not the only one that thinks that Michael Keaton was one of the best Batman actors ever either. He played Bruce Wayne in ‘Batman’ back in 1989, and also in ‘Batman Returns’ in 1992.

So tell me what you think about Michael Keaton returning as Batman in ‘The Flash’!