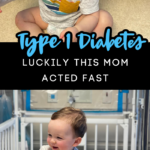 As a parent, this is such a scary situation, and it would be so easy to gloss over the symptoms.

Especially during this particular summer, when temperatures are breaking records left and right, the thirst gets to be a REAL thing.

So, when california toddler, Maddox, started grabbing his momma’s water bottle to take long gulps, there weren’t any immediate red flags raised about his intense thirst — it was HOT.

Courtney Moore, Maddox’s mom, got a little concerned, however, when the toddler started soaking through his diapers each night and during the day.

I’m afraid I still wouldn’t have given it another thought — the kid was drinking a ton, so it would make sense that he peed a ton.

LUCKILY, Courtney had a bit more forethought — maybe it was mother’s intuition — and contacted Maddox’s pediatrician with her concern.

Not only was he acting incredibly thirsty from the moment that he woke up, and not only was he urinating through his diapers within an hour of drinking anything, but Maddox had started to slim down.

Courtney could have chalked this up to Maddox being an active toddler, but thank GOD she didn’t!!

My gut knew something was off. I called his pediatrician who ordered bloodwork.

It didn’t even take an hour for that blood work to come back — and the emergency phone calls to Courtney started.

Maddox’s blood glucose levels (some would call it his “sugars”) was freaking 684!!

Now, as a nurse, I can tell you that a NORMAL blood glucose reading would be closer to 80-100 — so 684 was dangerously elevated.

The pediatrician told Courtney to IMMEDIATELY take baby Maddox to the ER.

Maddox was actively in diabetic ketoacidosis (DKA) — a life-threatening side effect of diabetes.

His parents didn’t even realize anything was wrong until this point, but Maddox was diagnosed with what is known as Type 1 diabetes.

Type 1 diabetes is an autoimmune condition that occurs when the body’s immune system attacks the beta cells living in the tissue of the pancreas. This causes the pancreas to produce little to no insulin, which is a hormone that allows cells to use glucose for energy

The Pediatric Intensive Care doctors and nurses at Kaiser were able to work quickly to save little Maddox’s life.

But, this is a wake up call for all parents everywhere.

Although Type 1 diabetes is relatively rare, you should still know the early symptoms of diabetes, and watch for them.

If these symptoms get suddenly worse, you could be dealing with diabetic ketoacidosis, and you should seek IMMEDIATE help from a doctor.

Luckily, Maddox’s case has a happy ending, but now Courtney is warning other parents.

Moral of the story parents, pay attention to your kids and trust your gut. We got very lucky.

1 shares
These Inflatable Halloween Lights Decorate Your Pool With Pumpkins And Ghosts
← Previous
Johnson & Johnson Has Recalled Sunscreens Including Neutrogena and Aveeno
Next →
Click here to cancel reply.