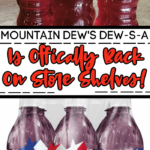 It was exactly three years ago when PepsiCo released the popular soda flavor Mountain Dew’s Dew-S-A and since it’s launch, the soda bottles were pulled from store shelves.

The patriotic bottle combined three flavors in one and now, Dew-S-A is officially making a comeback coincidentally just in time for the fourth of July.

For those of you who haven’t taken a sip of the red, white and blue, Dew-S-A combines three different soda flavors including Code Red, White Out, and Voltage for a deep purple concoction!

You can expect a kick of cherry from Code Red, a smooth citrus flavor from White Out, and a raspberry, citrus and ginseng combination with Voltage.

Individuals on social media are already posting the colorful bottle on Instagram, claiming the bottles and cans can be found at various retail stores including Walmart,  King Scoopers, and Kroger.

As we’ve seen in the past, Mountain Dew has a tendency to introduce flavors and then pull them off shelves without any warning so while you can, you can find Mountain Dew’s Dew-S-A in cans and bottles for a limited time!