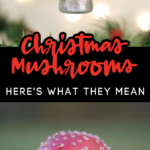 My daughter has started this weird obsession with the mushroom — specifically the red and white toadstool that has become so popular this year as a symbol to go along with Christmas.

She’s not the ONLY one that’s obsessed. They seem to be the hot Christmas decor item of the year.

You’ll find this cute little figure on everything from wrapping paper, to holiday candles, to holiday cards, to ribbon, to ornaments, and they even resemble the Jolly Head Elf in the Red Suit — Santa — himself!

But, why the heck do we associate the red toadstool with Christmas? I mean, is it a thing?

Turns out, yes. There is a reason that the red and white mushroom — the fly agaric mushroom — is particularly popular at Christmas time — and it’s more than just its relationship to the mushroom that makes you grow in Super Mario Bros.

Yeah. Like most everything else, there is more than one explanation, but they’re all pretty interesting.

First off — they look like Santa, with their white stem (his beard) and red top (his jolly christmas hat). It’s no wonder we associate these toadstools with the holiday season.

The other explanations are a bit more involved and tricky, but hang with me.

These fly agaric mushrooms are known to have a psychedelic quality when ingested. They are traditionally a part of shaman practices. People thought the shamans got high on the mushrooms, and then spread that peace and love to the people in the villages — sort of the first Santas, if you will.

“It’s become commonplace and is generally believed that the whole ‘Santa Claus’ myth is a folkloric tradition of shamanic travel,” says [one expert], “and that reindeer are notorious for liking to eat these mushrooms and become inebriated on them.”

There is even a thought that the “flying” reindeer were actually a hallucination started by these shamans who were high on the ‘shrooms.

I mean, it’s plausible. Why on earth would we associate flying with the reindeer — which have no flying capabilities IRL? The legend may have come about as merely a peaceful holiday trip.

We can take it even further. The red and white toadstool is possibly the anthropomorphic representation (giving it human qualities) of Santa Claus. You take a nibble of this jolly Santa Claus ‘shroom, and “he” gives you a peaceful, easy feeling — the spirit of Christmas.

“Beyond that, there’s a [sic] even a possibility that Santa Claus as a mushroom surfaces from a cult within Christianity where a psychoactive mushroom was served for the elite in Eucharist.”

In modern times, some have made the “lucky mushroom” into a Christmas day tradition — kind of like the Christmas Pickle.

It is “lucky,” because whoever finds it gets to open the very first gift on Christmas day.

“It grew out of this heritage coming out of Germany where you had this culture of hanging a mushroom on the tree as a symbol of good luck — Then there are these other tangents around it as well that it just so happens they grow around evergreens so you have a good connection with the Christmas tree and the colors are very Christmassy and bright. And then the other hook we love is that reindeer love eating them.”

If you are getting any bright ideas about starting your OWN tradition by tripping on this mushroom toadstool, beware.

“This mushroom isn’t easy to eat — You have to know how to prepare it and if you don’t do it correctly you’re going to get very sick. It’s not something to experiment with.”

No matter how you look at them, they are pretty cute. Just make sure you get your red and white toadstool fix from all the Christmassy decor (like these toadstool solar powered lights) that you can find out there, and not from making a festive lunch out of the ‘shroom.