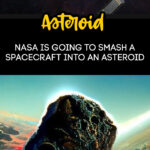 Remember that movie from 1998, where Ben Affleck and Bruce Willis are going to save the world from a ginormous asteroid by crashing into it?

Well, move over Armageddon, NASA is about to see your movie plot and raise you an actual spacecraft versus asteroid situation.

They are going to intentionally crash an unmanned spacecraft into an asteroid, to see if it will make a difference in its orbit.

Now, is this asteroid — known as Dimorphos — in danger of smashing into Earth, wiping out civilization as we know it?

No. This maneuver is an international collab that is working to prevent future asteroids from ending Earth.

They are going to crash a Double Asteroid Redirect Test spacecraft — known simply as DART — into the asteroid to try to knock it off course.

While the asteroid poses no threat to Earth, this is the world’s first test of the kinetic impact technique, using a spacecraft to deflect an asteroid for planetary defense.

This is simply a test aimed to protect the globe from future asteroids that might slam into Earth.

I mean, it’s actually pretty cool if you think about it. We are literally living in the future, where the plot of a sci-fi movie made in the 90s is pretty much coming to life.

The DART spacecraft actually launched about 10 months ago with a SpaceX craft. It is just now ready to catch up with the giant asteroid, HOPEFULLY crash into it, and slow the speed of the space rock.

If everything goes as planned, they will slow the speed of Dimorphos. This would tell NASA if a future mission like this would prevent a collision with Earth by a different asteroid.

The collision of DART with Dimorphos is set to go down on or around September 25th.