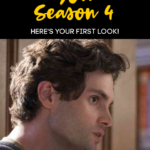 It’s about time we got some news, I miss that serial killer called Joe Goldberg, played by Penn Badgley.

I mean, he isn’t Dexter… but I still like Joe and absolutely love the Netflix series ‘You’!

I have been trying to be patient about season 4, but it sure does seem like it’s taking forever.

Well, we finally get a first look at Joe Goldberg from season 4 of ‘You’ and he has a beard!

The new image from ‘You’ Season 4 shows Penn Badgley as Joe, the stalker and serial killer that falls in love way too easily.

The beard is because Joe had to change his appearance because he’s done some more naughty things, and it’s time to start again.

‘You’ is based on a novel by Caroline Kepnes that I really need to read, the books are always better… so you know it has to be a great read.

If you haven’t watched seasons 1-3 of ‘You’, I highly suggest you start now so that you can join us in watching season 4 on Netflix.

I won’t post any spoilers in this post, so it is safe to continue reading… but if you have already watched season 3, you can read this post that shows where we currently are on this adventure with Joe.

I think the thing that would make Joe most miserable is not… If he was tortured and killed by a woman, he would, in his mind, almost be vindicated. He’d be like, ‘I am the most persecuted man in all of history and I can be a martyr for love.’ That is kind of what he would think in his mind. And Beck even says this in the first season – she says all that. And it’s why people repeatedly do not call the cops on him, as sort of absurd as that might be at times. But it’s true. And so I think for the next season, my conversations with Sera are really, I think, the most exciting so far because I think we’re really going to get into that. And the next season could be quite different. It really could be quite different.

As of right now, there has not been a release date announced, but you can pretty much plan on it releasing to Netflix in 2023.

Check out Joe Goldberg with his new look for season 4 of ‘You’ below, do you like the new look?