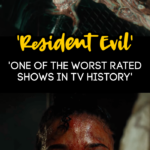 OMG. I tried. I really tried to muscle through the Resident Evil series.

Turns out, I’m not the only one who had a hard time connecting with the show.

According to LADBible, Resident Evil is officially one of the “lowest rated shows in TV history,” and I’m not going to argue with that sentiment.

I know we all had super high hopes for this series. We eagerly waited, planned our binge parties, and then turned the show off halfway through the second episode.

It’s true that they can’t ALL be winners, but — ugh.

With shows like Stranger Things, The Umbrella Academy, Ozark, Magnolia, Virgin River, and even Outer Banks, I had such high expectations for a show that already has such a cult-like following.

If you’ve been living under a rock for the past — oh — 16 years, Resident Evil (the show) is based on the horror video game franchise that boasts the same name.

Years after a viral outbreak caused a global apocalypse, Jade Wesker vows to bring down those responsible while fighting to survive against the Infected.

In this less-than-stellar series, Ella Balinska and Tamara Smart take on the role of Jade Wesker. Lance Reddick takes on the role of patriarch, Albert Wesker. Adeline Rudolph and Siena Agudong tackle the role of Billie Wesker.

Now, this series has 8 episodes in its arsenal, and they all dropped together on July 14.

Oh trust, we had a whole thing planned around binge watching the series. Nope. Didn’t happen.

If Rotten Tomatoes is the gauge by which we measure TV shows, this one got a 22 Audience Score. That’s out of 100.

Some prefer to measure a show’s greatness against IMDB’s rating. In that case, Resident Evil got a miserable 3.4 out of 10.

You can take your chances with trying to watch the series. But, just know, you have been warned. LOL!

You can see the Resident Evil trailer below.