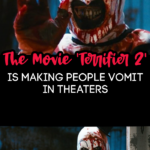 Apparently closing your eyes with this new horror film simply isn’t enough to shield you from scary scenes.

And for one main reason, this slasher film is unlike other scary movies.

So if you’ve ever turned your head away from certain scenes because of gore and blood, this new film is most likely not for you.

Dubbed Terrifier 2, a sequel to the first Terrifier, the second film revolves around an evil clown named Art who returns to Miles County to terrorize a teenager girl and her younger brother.

The dark flick has caused a frenzy on social media because apparently, the film isn’t easy on the eyes nor the stomach.

There’s even a graphic warning for the new film to inform movie goers know that this cinematic piece shows “graphic violence” and “brutal depictions of horror”.

So how scary is the film? @ratshitbastard posted to Twitter that his friend passed out during the film while others went on social media to say they even heard audience members puking.

And one guy claims he even vomited in his popcorn.

Starring Jenna Kanell, Samantha Scaffidi, and David Howard Thornton, Terrifier 2 is up on the big screen in theatres now, that is if you can stomach the gory scenes.