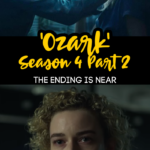 The end is nearly here and it’s bittersweet.

‘Ozark’ has been one of the few series that I truly loved.

I’m super sad for this final part of season 4 and the final ending to ‘Ozark’, but I know it has to end.

If you haven’t watched part 1 of season 4 of ‘Ozark’, I’ll try my hardest to avoid spoilers.

Part 2 of the final season of ‘Ozark’ contains the last seven episodes of Netflix’s crime drama.

‘Ozark’ season 4 part 2 brings the Byrdes’ story to an end, the part 1 ending totally caught me off guard.

Ruth’s reaction was understandable and I am anxious to see what she does in these final episodes.

I mean, she has lost pretty much anyone that she has ever cared about and we know there will be revenge!

I think we can all be sure that it will end with more violence and death, but I feel like the Byrd family survives and moves on with life.

I don’t like waiting, so thankfully as we all know, Netflix will drop all 7 episodes of the series finale at one time.

I’ll be binge-watching it all at once I’m sure and I feel like I’m going to need some kleenex.

You can watch the trailer for part 2 of season 4 of ‘Ozark’ below!