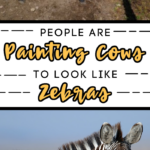 But, it turns out, those stripes serve a better purpose than just looking awesome.

They tend to not bother zebras as much as some other animals.

Now, people are painting their cows with white stripes to look like zebras, and it just might help the environment — not to mention the cows.

Scientists in Japan are testing whether painting black cows with white stripes might prevent them from getting bitten by those pesky horseflies — which can be extremely bothersome to the cows.

In the past, farmers have used pesticides to prevent flies from bothering their herds of cows.

But, those pesticides are awful for the environment — not to mention that they are EXPENSIVE.

So, these scientists in Japan took to their outdoor lab to form a hypothesis and get to researching whether painting black cows with white stripes might help the problem.

What were the results?

(The) results — suggest that painting black-and-white stripes on livestock such as cattle can prevent biting fly attacks and provide an alternative method of defending livestock against biting flies without using pesticides in animal production, thereby proposing a solution for the problem of pesticide resistance in the environment.

So, what does that mean?

Basically, if you paint your black cows with white stripes, it might alleviate the need for all those dangerous pesticides that are used to stop the flies.

The total numbers of biting flies on legs, body, and the sum of legs and body for B&W cows were almost half those (on the other cows).

They found that painting the cows with white stripes seemed to confuse the flies, and prevented them from landing on the surface of the cows.

If you think about it, this is pretty awesome news.

Not only can it be beneficial to livestock, but similar things can be done with humans.

It might help farmers in the fields — or even people that choose to go camping — to wear an outer covering with black and white stripes.

What do you think about the experiment and the results?

2 shares
This Ace Flyer Teeter-Totter Is The Perfect Imagination Play Station For Up To 7 Kids At Once
← Previous
'Emily In Paris' Has Finally Started Filming Their Second Season And I Can't Wait
Next →
Click here to cancel reply.