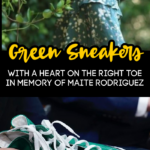 This is pretty much the saddest — and also the sweetest — gut-wrenching thing I have heard in a very long time.

We all know, by now, what happened in Uvalde, Texas. 19 students and 2 teachers senselessly gunned down for literally no reason at all.

Matthew McConaughey, who is a native of Uvalde, recently spoke at a White House Press Briefing. He was there to plea with lawmakers for better gun control. He also spoke about his experiences when he talked to the victims’ families.

Grab your tissues, because you’re about to need them.

To the briefing room, McConaughey brought a pair of sneakers. Green sneakers with a heart on the right toe.

Maite wore green high-top Converse with a heart she had hand-drawn on the right toe because they represented her love of nature — These are the same green Converse on her feet that turned out to be the only clear evidence that could identify her after the shooting.

Apparently the results of the shooting were so severe that the only way to identify some of the victims was through DNA.

But, these sneakers were a clear sign that Maite had succumbed to the evil of the shooter.

What I would like the world to know about Maite Yuleana Rodriguez is that her favorite color was green and she loved those lime green converse, so much so that she drew a heart on the right one, her favorite show was attack on titans, she loved to call me “mama”

Now, in support of the girl that loved those silly green Converse sneakers, people are flooding the Converse website, and buying all the green Converse.

They are taking permanent marker, and drawing a heart on the right toe — just like Maite.

Some people are even urging Converse to rename the green sneakers for the girl who loved them.

Not only do they want Converse to rename the shoes, they have suggested putting a heart on the right toe in remembrance of Maite.