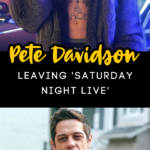 Dang it. He’s the entire reason I watch the show.

According to Variety, the show is ending its 47th season this Saturday night. And, along with the finale of the season, it’s the finale for Pete Davidson.

We’ve seen it happen many times before. Actors get boosted into stardom by the sketch-comedy show, and then they exit.

I’ll be sad to see Pete go, but he isn’t the only one expected to make his final appearance this Saturday night.

Aidy Bryant, Kate McKinnon, and Kyle Mooney are also expected to make this show their last.

I mean, it’s really not a surprise. Each of these actors have gone on to bigger and greater things.

It was awesome to have such talent on the show for so long, but it’s time for them to grow their wings and fly high.

Aidy Bryant has already had her own TV show, for crying out loud. If you haven’t seen Shrill, stop what you are doing, and go watch it now!

Kyle Mooney has done ALL the things, including voice over work on Rick and Morty and Bob’s Burgers.

Kate McKinnon, well, I’m surprised she has lasted on SNL as long as she has. She’s been a cast member since 2012!!

My girl is a straight-up movie star, TV star, and even a well known voice actor. It’s about time she breaks out on her own.

But, Pete Davidson, not only has he been front and center in the news as Mr. Kim Kardashian, he has already been on the big screen.

If you haven’t seen The King of Staten Island can you really call yourself a Pete Davidson fan?

He has also done SO much voice over work, and been in many other TV shows and movies.

We have pretty much watched him grow into a mega-star since he joined the SNL cast at age 20 in 2014.

Good luck to Pete, and everyone else exiting the show this weekend. We will be sad to see this transition, but we know it only means good things are in your future!