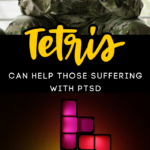 PTSD is a VERY serious issue going on in the world. It can affect anyone who has experienced war, assault, car accidents or other kinds of situations in which they felt their life was in danger.

But research is now finding that Tetris can actually help those with PTSD! Who knew that a video game had such therapeutic value!

Most PTSD patients deal with flashbacks of whatever horrific event happened to them. By playing Tetris, which is a visually stimulating game, it forces the brain to focus on that instead, helping ease the flashbacks and send a blocker to them.

I can actually attest to this! Although I didn’t directly play Tetris, I had an app on my phone that was kind of a Tetris/Sudoku hybrid that I would play to get my mind off of things after I endured a car accident while 8 months pregnant.

Luckily, my daughter and I were ok after the car rolled down an embankment and completely flipped 3 times. I almost lost my arm and we both almost lost our lives. After the accident, it felt like any time I closed my eyes, I was spinning in the car again.

Playing a stimulating ‘brain game’ like Tetris, helped me redirect my thoughts to calmer and more logical things, to where I could actually fall asleep.

Games like these are said to help alleviate involuntarily recurring visual memories of traumatic experiences. So if you or someone you know is suffering, have them give this a try!