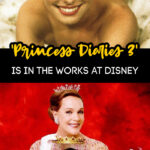 Shut up!! We will soon be headed back to the kingdom of Genovia, as Princess Diaries 3 is officially in the works at Disney!

Gah!! My teenage self just did a little happy dance around the living room.

The film is still in its infancy — the cast hasn’t even been confirmed yet — but we know it’s coming, and that’s enough!!

Now, Anne Hathaway hasn’t signed on to the film — she doesn’t have a contract for a third movie.

But, according to ET, she has publicly stated that she would be VERY interested in returning to the franchise she made famous.

I would more than entertain it, I’m pulling for it, — If there’s any way to get Julie Andrews involved, I think we would make it work. We would go to where she was and put a green screen behind her and just make it happen.

They are saying that Princess Diaries 3 would be a continuation of the first 2 films, and not a reboot.

Thank goodness, right?!? I’m about tired of all the knock-off reboots floating around movie studios.

If you need a refresher on your Princess Diaries knowledge, don’t worry. We got you!

Anne Hathaway takes the helm as Mia, an awkward high school student who learns that she is the princess of Genovia.

Julie Andrews plays her paternal grandmother, Queen Clarisse, who passes the torch to Mia in the second film.

We have no idea what might happen in Princess Diaries 3, but we’ll soon find out!!