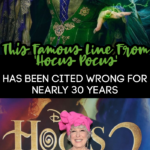 Frightfully soon the black candle will be lit in the old Salem witch house that will free the Sanderson Sisters once again.

And if you thought you knew the first film by heart and are prepared to memorize all the lines in the second too, apparently you may have be wrong with one specific line we all thought we knew.

Bette Midler, otherwise known as Winifred Sanderson in Hocus Pocus, recently posted an image from the sequel with a caption that included a famous line from the film.

And to our surprise, that famous line we as Hocus Pocus fans most commonly quote has been recited incorrectly for nearly 30 years in the making and everyone is shocked over it!

The caption which previously read, “Hello sailors,” Bette wrote on Instagram. “My name’s Winifred, what’s yours?” (autocorrect – don’t mess with this witch!)

The internet was certainly caught off guard at the sight of seeing the word sailors rather than Salem, and it wasn’t until only an hour ago that the caption was humorously edited to “Salem”.

Although Bette blames the edited caption on autocorrect!

“hello SAILORS?! are you telling me it’s not hello SALEM?, one fan wrote.”

“Wait… it’s sailors not Salem??, with a laughing face.”

While it’s say to safe we’re all flabbergasted at the idea of Winifred saying sailors and not Salem before she starts singing on stage in one scene of the film, at least we do know one thing!

And that’s the long awaited release date of Hocus Pocus 2 which is in t-minus two days; here’s hoping we recite lines from the sequel correctly.