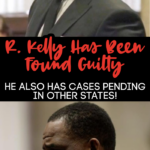 I must start this off by saying that my heart goes out to all of the victims, no punishment is harsh enough in my opinion for someone that has done this to people.

R. Kelly has been found guilty on all 9 counts of sex trafficking today!

A jury in Brooklyn that heard the case returned with a guilty verdict on ALL counts, the charges involved 6 female victims, including the late Aaliyah, who had married R. Kelly when she was only 15 years old.

R. Kelly has of course denied the charges and had pleaded not guilty.

The charges included bribery, coercion, enticement, sex trafficking, and racketeering and he has been in federal custody for about 2 years now.

We are extraordinarily disappointed in the verdict was returned by the New York jury today. Mike Leonard and myself believe that the verdict was not supported by the evidence and instead is a reflection of the hysteria whipped up by a couple of TV shows. We intend to continue to fight on R Kelly’s behalf to ensure that everything is being done that can possibly be done.

R. Kelly never took the witness stand, but many took the stand to speak about what they went through, including a male and female that say they were groomed for sex and also endured psychological abuse.

He used lies, manipulation, threats and physical abuse to dominate his victims.

He also has a criminal case in Chicago that has been on hold and he also faces more charges in Minnesota!

If you are a victim of sexual assault and sex trafficking, please call the National Sexual Assault Hotline at 1-800-656-4673 or visit rainn.org for help.