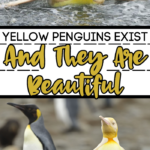 Penguins are known for their black and white exterior that makes the glacier riding species look like they’re wearing tuxedos.

The outdoor animals always look prepared to go out to a fancy dinner but what if I told you there’s also a yellow species to the sashing animal.

That’s right, I’m not crazy and yellow penguins do exist!

Meet Yves Adams, the wildlife photographer who captured a photo of the rare yellow penguin on an expedition tour in the South Atlantic two years ago.

While photographing a colony of king penguins in South Georgia, Adams spotted a bright yellow bird in a sea of tuxedos!

“While unpacking our rubberboats merely after landing on a remote beach on the island of South-Georgia, this leucistic King penguin walked up straight to our direction in the middle of a chaos full of Sea elephants and Antarctic fur seals, and thousands of other King penguins. How lucky could I be!” the caption wrote on Instagram.

Stunning as it may be, the bird’s rare yellow color is actually caused by leucism, a condition that makes the penguin partially lose its pigmentation and only 1 in 20,000 to 146,000 penguins have this yellow feature!

Talk about being in the right moment at the right time.

Yves Adams’ photos have gone viral of the rare and yellow flightless bird on every social media platform because as it turns out, black and white penguins are so last year.

You can also check out Yves Adams’ website to witness more amazing wildlife photos and if you thought the yellow penguin was stunning, just wait until you see his underwater collection.