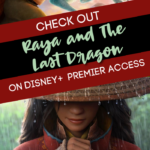 It is always a good weekend when Disney comes out with a new movie!! It’s like Christmas!

This just HAPPENS to be one of those happy weekends when we get to sit with our freshly popped popcorn, our beverage of choice, and lose ourselves in the magic of an Epic Disney story for the first time.

Raya And The Last Dragon opened Friday, and this is one film I have been anxiously awaiting for awhile.

First, can we just talk about the animation and the scenery for a minute? Gah!! Y’all. It’s gorgeous!

Disney just keeps getting BETTER and BETTER with their animation technology, and it FLOORS me.

Okay, so the film is set in Kumandra — which is a land that has been devastated, ravaged, and split into 5 tribes: Fang, Heart, Tail, Spine and Talo.

Wait a minute, we have to back up a minute.

Kumandra USED to be a prosperous land, but it was pretty much destroyed by the Druun, who were evil spirits that turned people to stone.

At the same time, Kumandra was full of dragons, and these dragons used their magic to create an orb, which was used to ward off the Druun.

The dragons also attempted to turn everybody from stone back to living, but in the process, they ended up turning to stone, themselves.

Once the dragons disappeared, a power struggle for the orb began, and that’s when Kumandra was split into the 5 tribes based on their placement around a giant river.

Raya has been in training to guard the orb, but problems ensue, and the orb ends up getting destroyed.

When the orb is destroyed, the Druun suddenly reawaken. *EEK!!

There are casualties, and one of them just happens to be Chief Benja, who is Raya’s father.

So, I’m not going to give away too much more.

Just know that Raya goes on a quest to find the only remaining dragon to help her recover the orb pieces so she can restore order.

Also, you NEED to see this movie. It is Disney, but it seems to pull from the magic of Pixar to bring us this EPIC ride.

It DID open in theaters, but simultaneously dropped on Disney+ Premier Access — which is how my family watched it.

To see the trailer of Raya And The Last Dragon, you may go HERE.