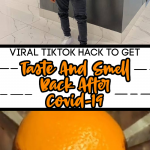 Kemar Gary Lalor is a 23-year-old architecture student in Canada. Kemar and his mother, Trudy-Ann Lalor, both had Covid-19.

I think by now we all know that one of the major telling signs is the loss of taste and smell. Some people struggle after beating the illness with that loss for a long time.

Kemar’s mother recovered her taste and smell within days by using a Jamaican remedy. So she told her son how to do it and it helped him as well.

You’ll need an orange and brown sugar. First, he shows that you need to basically burn the peeling over the orange over a flame, like on a gas stove.

Once it is completely blackened, you can remove it from the heat. Then holding it with a fork or tongs, you’ll need to cut off the blackened orange peel.

While it is still hot, smash it up in a bowl or a cup. He just did it with a fork.

Next he said to stir in about 2 teaspoons of brown sugar. I don’t think the measurements are exact, so if you want to add more… add more!

Mix it well and eat! He said he had his sense of taste and smell back within a few hours!

Apparently, this is a remedy that his mom had been given as a child when she lived in Jamaica. It’s super simple and what’s the harm of trying it?

It was so helpful that he knew he had to spread the word to help others out and he made a TikTok. This was in December and I am just now learning about it today!

People have been trying it out for themselves. Some people it helped right away, others after a few tries, and some it didn’t help at all.

How Does It Work?

Karan Rajan is a surgeon with the National Health Service in the UK. Even he gave it a try and made his own TikTok explaining why and how it can work.

He explains that this may be working for people as something called olfactory training. The olfactory nerve is the nerve that communicates with your brain on the sense of smell.

Watch the full TikTok video below to see him prepare it step by step!